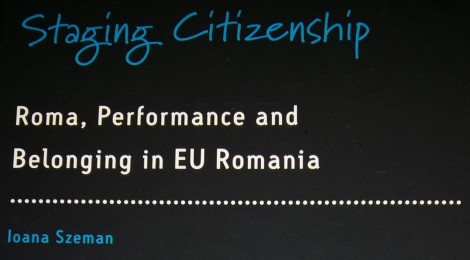 This is a book about Romanian Roma and their plight in terms of socio-economic conditions, human rights violations and lack of cultural recognition. The author, Ioana Szeman argues that Roma live in a ‘citizenship gap’ which separates their legal entitlements and rights from their everyday experience. Even if they have been recognised as national minority after the fall of the communist regime and have the same rights as other citizens of Romania, they continue to be victims of discrimination, many of them live in poverty, and are deprived of their basic citizenship rights including their ‘cultural citizenship’ the possibility to experience group belonging an express openly their cultural differences is the public sphere dominated by stereotypical representations of ‘the Gypsies’.

However this is also a book of hope. The author depicts a complex and compelling image of how life for the protagonists of her book is still possible and even enjoyable under these difficult conditions. The gap between formal recognition and de factodeprivation is also a space where the performance of citizenship is staged (hence the title of the volume). At the one hand Roma carve out a niche for experiencing collective belonging through their creative cultural performances even within the scenes organised by hegemonic ideologies like the ‘monoethnic nationalism’. On the other hand even if the postsocialist media-scape in Romania is saturated with stereotypical images about ‘the Gypsies’, they are not passive consumers of these images but manage to forge alternative collective interpretations and build a ‘Roma counterpublic’in the age of ‘commercial neoliberalism’.

The ethnographic present of the volume covers the period between 2001-2012 during which Romania adopted a new National Strategy for Inclusion of the Roma (2001), joined the European Union (2007) revised its strategy to fit into the European Framework Strategy for Roma (2011) which was adopted in the midst of international press-scandals triggered by policies like Italy’s ‘Nomad Emergency’ or the evictions and deportations of Romanian Roma migrants in France. This historical context appears in the background of the analysis but the main focus is on the local and national levels within Romania.

Szeman carried out intermittent fieldwork with a local Roma community she pseudonymise as Pod. This community makes a precarious living mainly based on selling recycled materials collected from a garbage dump of a city in Transylvania. Their perspective and the local voices blend into the analytical interpretation of the social world, media images, and political processes observed by the author. The key topic for the analysis is performance and its different interpretations. The volume takes the reader through a wide diversity of social scenes and domains where performative actions take place.

The first part of the book (chapters 1-3) describes the national and local settings: a fair in a museum in Bucharest, the poor Roma community living on the garbage dump, and the scene of NGO engaged in training for activists and local developers. Most benevolent approaches to Roma fail to bridge the citizenship gap they live in, the author argues, since they most often reproduce stereotypical representations of authenticity reinforcing misguided perceptions that most of the poor Roma do not have culture at all, since these do not fit these images.

The second part (chapters 4-5 and 6) focuses more closely on artistic performance involving Roma or the stereotypical representations of ‘Gypsies’. One of these chapters takes performance of local youth central stage presenting the failure of the educational institutional to offer schooling to most of the poor Roma. This is contrasted with the success of the ethnically mixed dance group Togetherincluding the very same youth. Their repertoire is ranging from local Roma dances to exotic Boollywood-style performance. In this way the dance group enters the domain of exotic representations which are critically examined by a chapter on popular soap operas exploiting ‘Gypsy chic’ which became popular during the period of the fieldwork for this book. A final chapter is focused on the ambivalent attitudes towards of the ‘manele’ as a musical style, trough the story of the celebrated musicians, and his failure to get be selected as representing Romania at the Eurovision Song Contest, and also showing the dynamics of reality shows putting Roma in central roles.

In the conclusions the author calls for a reform in the domain of cultural production: the state and the European institutions should support historically rooted and socio-economically contextualised cultural performances while helping to detach culture from ethno-nationalistic hegemonies. After a decade of EU membership of Romania and emerging institutionalisation of the Roma culture at the European level this call remains timely and valid.

The book is written in an a clear and enjoyable prose, the concepts introduced are well chosen and enlighten the analytical work (‘citizenship gap’,  ‘Roma counterpublic’) even if in a few cases seem unnecessary even for a professional reader; for example the ethnographic method of participant observation is re-branded as ‘co-performative witnessing’ without much added value (p. 49).

The main argument of the book can bee read as following the footsteps on the earlier anthropological works on ritual and identity among the Roma. In this context the book offers a grounded case study from Transylvania. In addition to that it expands the local study into the critical analysis of audio-visual media at the national level. Therefore this volume is both a valuable contribution to the literature on Eastern European Roma form the perspective of performance studies and also offers a good read for everybody interested in cultural analysis of subaltern populations under present global conditions. 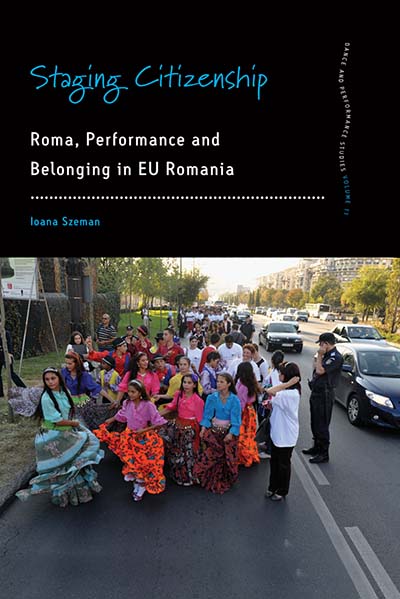 Market expansion to the east, in the context of EU enlargement, and the corresponding import of civil society and democracy, including a focus ont he Roma minority, have led to the recent ubiquity of Roma music and dance performances, both in the West and in Romania. The figure of passionate Gypsy has become one of the latest sources of exoticism in the West. Marketed as timeless and exotic, Roma bands from Romania and other Balkan countries feature in international festivals; DJs play ‘Gypsy music’; Gypsy dress parties have spread, from London and Paris to New York and Houston. In Romania, Roma dance and music groups have proliferated, while new TV soaps about Roma (acted by non-Roma) and reality shows featuring famous Roma musicians (such as Clejanii, featuring Viorica) have become increasingly popular. However, the visibility of Roma music and dance performance has not translated into Roma being recognized as cizitizens, despite the fact that Roma express cultural citizenship through these media. (…)

The absence of Roma from Romanian theatre is one illustration of how Roma have been excluded from the institutionalized, state-support version of national culture. If national theatre is a reflection of the nation as imagined by its cultural producers, playwrights and so on, Roma – who have been made invisible in theatre – have instead populated other performance spaces, especially music spaces, and have become symbols of the nation while being denied their own culture. Taking its cue from performance studies scholarship on citizenship, on Travellers, and on performance ethnography and work in Romani studies, anthropology, ethnomusicology and media studies, this book uses performance to analyse Roma cultural production across the genres where Roma have become most visible: in music, dance and television in relation to the citizenship gap. I also analyse the representations of Roma in everyday life. I situated these performances, in the wider structural constraints, both socio-economic and discursive/policy-related, and show how they confirm or challenge the citizenship gap. Performance, understood as “makin, not faking”, in its muliplicity of occurences – from everyday life to the stage and screen – represents a privileged lens into exploring the citizenship gap for Roma as a process (…).