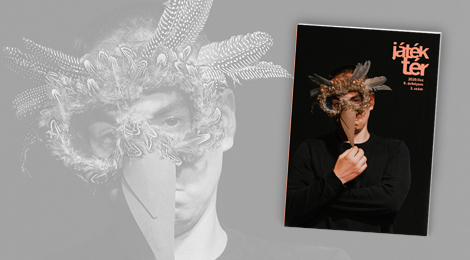 Annamária Kófity: Tiny Impressions about Clowns
Annamária Kófity is a puppeteer at the Brighella Puppet Theatre of the North Theatre of Szatmárnémeti/Satu Mare. Her essay presents the lessons of the last repetition process from before the pandemic. The creators of the nonverbal performance titled Apró néni és a nagyra nőtt Búbánat (“The Tiny Aunt and the Melancholy Grown Large”) is strongly inspired by the clown’s mode of existence. The author also addresses the question of the way in which we can cheer each other up, both on the stage and in everyday life.

Zsuzsa Ozsváth: (Puppet) Theatre in 3D: A Short Essay on the Life of the Puppeteers of Nagyvárad/Oradea
The following paragraph summarizes very well the essay of the author who works at the Lilliput Company of Nagyvárad/Oradea: “How do I view a theatre performance if I don’t have anything to do with it, if I’m designing its poster, if I’m in charge of its press, if I’m an assistant,  if I’m performing in it (well, of course, then I don’t view it, or at least I don’t view it from the auditorium), if I’m rooting for the actor who stumbles because a box was put on the stage ten centimetres away from where it should have been put, and how do I view my own life after I’ve seen the theatrical life.”

Réka Hegyi: Me and the Puppet Theatre: A Subjective Report on the Puppet Theatre of Kolozsvár/Cluj
In the summer and autumn of 2020, there was a wide debate in the Transylvanian press around the Puck Puppet Theatre of Kolozsvár/Cluj, which has a Romanian as well as a Hungarian department, owing to the fact that some of the former directors of the Hungarian department have expressed their dissatisfaction with the repeated gestures, considered to be exclusionary, of the Romanian general director of the theatre. Related to this case, our author, Réka Hegyi evokes her past experiences related to the puppet theatre of Kolozsvár/Cluj, which she had as an employee of the institution, at the literary secretariat, and also as a puppet theatre critic. According to her, the Puck Puppet Theatre has always been troubled by serious problems. At the same time, the author expresses her hope that the Hungarian puppet theatre company will be able to raise its activity within the institution to a superior professional level and to give it a more pleasant atmosphere, because, in any case, the children deserve this, and as a result, puppet theatre shows of a higher quality.

Ildikó Patka: Found Image / Ecce homo. The Puppet as Reflection: The Existential Feeling of a Puppeteer of the Puppet Theatre of Kolozsvár/Cluj
Ildikó Patka is a puppeteer at Puck Puppet Theatre of Kolozsvár/Cluj. Her short essay, inspired by a photograph of the puppet theatre show I Am Pinocchio, is based upon the idea of the kinship between the puppet and the caricature, emphasizing that sometimes the puppeteer herself is a puppet pulled on a string by the theatre administration, but the puppet theatre helps us nonetheless to live our lives.

Katalin Deák: “Who Passes Over the Glass Mountain”: Interview with Emőke Lukács
Emőke Lukács is a puppeteer and the director of the Udvarhely Puppet Workshop from Székelyudvarhely/Odorheiu Secuiesc. In this interview she describes her experiences at the Cimborák (“Buddies”) Puppet Theatre of Sepsiszentgyörgy/Sfântu Gheorghe and emphasizes the importance of occasionally stepping out of the closed walls of the theatre by asking ourselves the question if we indeed have an idea about the society about and for which we, theoretically, create theatre performances. In addition to these topics, she also talked to our reporter, Katalin Deák, editor of the journal Playing Area, about the activities and objectives of the Udvarhely Puppet Workshop and about the role of the puppet theatre within society.

Ildikó Novák: The Structural Change of 20th Century Puppetry
Building upon data related to the history of puppetry, this study tracks the most important events of the 20th century, which have led to the emergence of structural and representational forms that define contemporary puppetry (animation art). Starting from the identification of the basic structures of puppetry, the author reviews aspects of the European history of puppets, followed by the presentation, through listing the various schools of puppetry functioning within the academic system, of the transfer and establishment of the knowledge related to puppetry, which was preserved for centuries within the family environment.

Mircea Eliade: Strings and Puppets
In the chapter Ropes and Puppets of his volume of studies titled Mephistopheles and the Androgyne, the historian of religions, Fantastic fiction writer, philosopher and university professor of Romanian origins, Mircea Eliade (1907-1986) presents miraculous examples of the unity and cohesion of the world through examples inspired by Oriental philosophy, shamanism and Indian fakirism. His text, translated into Hungarian by Ildikó Novák, discusses the way in which the rope (and the string) appears in primitive and non-European cultures, its connecting role in the context of explaining the relationship between human existence and the world, and the function of the puppet as a metaphor for understanding the ties between the individual and the gods.

IN THE WAITING ROOM

Krisztina Kiss: “I’ll Unpack, Somewhere Far Away”: Interview with Actress Maya Sebők
Maya Sebők has participated in the Waiting Room Project for nine years and continues her career as a freelancer from January 2020. Meanwhile, she is also involved in promoting young talents, as well as in “mapping” her own creative personality. Our reporter, Krisztina Kiss has asked the young theatre-maker, often considered “weird”, about her years spent at the Waiting Room Project, about independence, moving, and the passing of time.

Zsolt Csepei: Short History of the Waiting Room Project’s First Decade, from a Trusted Source
The first independent Hungarian-language theatre company from Transylvania, the Waiting Room Project celebrates ten years since its establishment. Although they themselves are reluctant to accept labels, it is a matter of fact that the members of this project are the first independent Hungarian theatre-makers in our region. One of the founding members of the company, Zsolt Csepei evokes the past ten years. His essay presents the city of Kolozsvár/Cluj during the 2010s, the young graduates who have dreamt up a theatre among the ruins of the “treasure city of Transylvania”, and the way in which the run-down buildings have become welcoming spaces for the public. The author also reflects upon the ongoing search for working methods, the traps of theatre management, and the future of the independent company.

Andrea Zsigmond: “Everyone Is Driven by Something Else”: Interview with Actress Emese Simó
Actress Emese Simó, who was interviewed by Andrea Zsigmond, offers an account about her roles taken up within the Waiting Room Project and the years spent at the Csiky Gergely Hungarian State Theatre of Temesvár/Timişoara. The interview also deals with some aspects related to the existential differences between the independent theatre and the traditional stone theatre, the beginnings of her career as an actor, and her current search for new ways of expression.

Johanna Bertóti: Varjú Karcsi (“Charlie Crow”)
Johanna Bertóti’s theatre play for children, interspersed with poetry and musical moments, invites readers to a music school populated by songbirds, and not only. This space is an imaginary and playful one, but the problems, questions, and doubts of the character are not different from those which children of all times have shared, as the space of the school evokes the pedagogical environment that is familiar for many of us, somewhat inflexible, authoritarian, and failing to pay proper attention to the pupils.
Nevertheless, Bertóti’s text does not have a rigidly critical character, but instead selects dysfunctional aspects from the relationships between parents and children, pupils and children, and between the pupils themselves. The main character, Varjú Karcsi (“Charlie Crow”), enrolled in the Schuhubert Music School in the hope of a career as a singer, which is also nurtured by his parents, is finally expelled due to a prank, but meanwhile we also witness the forging of an authentic friendship between children. The play was staged as a theatrical pedagogy production by the independent theatre company of the Waiting Room Project and premiered under the direction of Andrej Visky, on September 10, 2020, in the independent cultural space ZUG from Kolozsvár/ Cluj, after which it will be performed in schools.